Sorry! You missed Disney Dance Upon a Dream at Rochester Auditorium Theatre 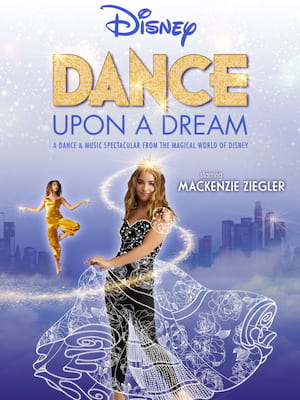 Disney Dance Upon a Dream

I grew up loving all things Disney, so the opportunity to tell an inspiring story through dance and the greatest Disney music of all time is a dream come true

Why See Disney Dance Upon a Dream?

Disney's Back With A Brand New Beat

Back with a brand new touring production, beloved children's brand Disney is pulling out all the stops to present a song and dance spectacular for the modern age. Featuring teen social media, tv and dance sensation Mackenzie Ziegler, the Disney Dance Upon A Dream will be casting its spell on a spring 2020 tour, hitting 50 cities across North America.

Taking audience members young and old on a magical journey about coming of age in the digital era, Disney Dance Upon A Dream features electrifying choreographer set to classic Disney songs from favorite animated films like Beauty and the Beast, Moana and Cinderella.

Who Is Mackenzie Ziegler?

A modern day Disney princess, Mackenzie danced her way into America's heart on reality TV shows Dance Moms and Dancing with the Stars. The sister of Maddie Ziegler, she forged her own career to become one of the most influential social media stars of Generation Z with over 30 million followers across a range of platforms. She also released her sophomore album Phases in 2018, followed by the release of her latest single HOT in the summer of 2019 and shows no signs of slowing down.  A true triple threat, this multi-talented performer is one to watch.

Seen Disney Dance Upon a Dream? Loved it? Hated it?

Sound good to you? Share this page on social media and let your friends know about Disney Dance Upon a Dream at Rochester Auditorium Theatre.